With time, we have seen a faster and efficient development in Cambodia. The government of Cambodia is now focusing on providing the best infrastructural facilities as well as development in different parts of the country.

Earlier, the scenario was totally different. Do you know, a few years back, Sihanoukville used to be a silent coastal city of Cambodia? Things started changing when Chinese investors began investing in the province. At present, Chinese people contribute more than 90% of Sihanoukville’s economy. In Sihanoukville, you will find Chinese people in local businesses, casinos, bars, restaurants, etc.

Cambodia is a country located in Southeast Asia. Currently, some top cities of this country are Phnom Penh, Sihanoukville, Krong Siem Reap, and Krong Battambang. When investors started flocking in the Sihanoukville and other cities of the country, the government started focusing on improving the infrastructure. One of the best examples is the new road from Sihanoukville to Phnom Penh.

The new road will act as an efficient link between the Phnom Penh and Sihanoukville. This will be a 190km expressway, which will be the largest roadway in Cambodia when operational in 2023. The construction of this new road project was started with the ground breaking ceremony held in March 2019.

Japan International Cooperation Agency (JICA) conducted the feasibility study for the development of this expressway from the years 2006 to 2018. It will be a two-lane road with a length of 190km, a width of 24.5m, and a maximum speed limit of 100km/h.

The road will originate from Tomnup Kob Srov Road in Phnom Penh, and it will run along the east side of National Road 4 until the town of Chbar Mon.

Another important thing about this project is, it also includes the construction of 89 elevated bridges and four rest stops. Apart from this, there will also be multiple gas refill stations built alongside the road, so that travelers do not have any hassle.

The expressway is a public-private partnership (PPP), and the project will be funded by CRBC and the governments of Cambodia and China. Talking about costing, this expressway road project is estimated to cost more than $2 billion.

Here’s what the head of the construction team said about this project, “The project consists of 280 workers. We understand the significance of this highway and clearly understand our responsibilities. During this special period, we take strict measures to prevent and control new coronary pneumonia, and steadily advance the construction Priority. “

We can see that the Cambodian government is now focusing on improving the roads and other infrastructure of the top cities. From this, we can say that the economy will get a further boost. Investing in real estate can get you better returns. If you are interested in Phnom Penh real estate or Sihanoukville real estate, Dragon Real Estate can help you. 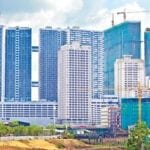 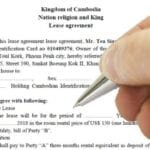 Rules for Renting A Property in Cambodia