Cambodia is officially known as the Kingdom of Cambodia. The country is located in Southeast Asia. It borders Thailand, Laos, and Vietnam. Some top cities of Cambodia are Phnom Penh, Sihanoukville, Krong Siem Reap, Krong Battambang, and Krong Kampot.

Phnom Penh is formerly known as Krong Chaktomuk Serimongkul. This capital city is the biggest and wealthiest city in Cambodia. This bustling city is situated at the confluence of three rivers: the mighty Mekong, the Bassac, and the great Tonle Sap.

Talking about Sihanoukville, it is developing right now. Earlier, Sihanoukville was used to a silent coastal city of Cambodia. The scenario changed completely when Chinese investors and Chinese tourists started coming in. Sihanoukville gone through many road and infrastructure development projects for transformation.

Right now, Cambodian government is also focusing so many on the development of Sihanoukville. In the groundbreaking ceremony of a 34-road construction project, the Prime Minister of Cambodia said once the project gets completed, Sihanoukville will become a modern, attractive city of Cambodia and the country’s second economic pole.

With the rise in Chinese investment, the Cambodia property market is booming right now. More number of people are willing to invest in Cambodia real estate.

As we have seen, the Cambodian government is now investing in the development of infrastructure of both the largest cities: Phnom Penh and Sihanoukville.

The new road will reduce the distance and travel time. It will be around 190 kilometers distance and the time it will take to reach from Phnom Penh to Sihanoukville, and vice versa will be just 2 hours.

The 190km-long Phnom Penh-Sihanoukville Expressway will be Cambodia’s largest roadway. And, it will be operational from the year 2023. This new road project will play a crucial link between the two major cities of the country.

The feasibility study for this expressway developed was conducted by the Japanese International Cooperation Agency (JICA) from 2006 to 2018. This project is designed to be a two-lane road with the total distance of 190 km/h.

This expressway project will originate from Tomnup Kob Srov Road in Phnom Penh and run along the east side of the National Road 4 until the town of Chbar Mon.

Talking about financing, the Phnom Penh-Sihanoukville Expressway project is estimated to cost more than $2 billion. It is a public-private partnership (PPP) project, and it will be funded by CRBC and the governments of Cambodia and China.

With constant economic and infrastructure development, it is good to invest in the country’s property market. If you are planning to invest in properties, Dragon Real Estate can help you. We are the best real estate company in Cambodia.

Are The Chinese Coming Back To Sihanoukville? 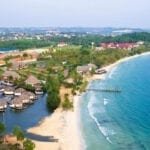 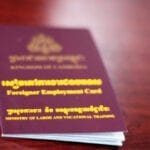 Visa And Work in Cambodia