Sihanoukville is one of the top cities in Cambodia. Over the past decades, Cambodia’s economy and its major cities like Phnom Penh and Sihanoukville, have seen a significant boost. Although there is nothing called a recession-proof country, but by seeing Cambodia’s history, we can say it is a recession-proof country. The country became successful in passing the significant recessions of 2000, 2008, and now 2020.

Over the past years, we have seen so many changes in Cambodia’s Sihanoukville. Earlier, it used to be a silent coastal city. The city started gaining attraction when Chinese investors started coming in and investing.

The government of Cambodia is planning to transform Sihanoukville entirely and make it a perfect place to attract more visitors. The Cambodian government wants to transform it into multi-purpose economic zones like Shenzhen, China. With the purpose of bringing more significant changes to the province, the government has introduced many sizeable infrastructural development projects in the province.

Some of these infrastructural development projects have been completed, while some are under construction. In short, the Sihanoukville infrastructure project is about to finish.

In 2019, the Cambodian government announced that it would spend around $294 million on infrastructure in Sihanoukville city. The government announced that it would build 34 roads to help transform the face of this beach city with new infrastructure, commercial buildings, and an attractive tourism sector. The breaking ground ceremony of the 34 road construction project was held in the month of November under the auspices of the Prime Minister of Cambodia.

The 34 roads will have a cumulative length of 84 kilometers with three roundabouts and six bridges totaling 252m in length. The project was started expecting that it will be completed in around eight months. However, COVID-19 caused some delays in the project completion.

We can say that working on Sihanoukville’s infrastructure is not an expense for the Cambodian government, but it is just an investment. By enhancing the Sihnaoukville’s roads and other infrastructural facilities, the government can transform the face of this beach city and enhance the look of real estate. This way, more tourists will be attracted to Sihanoukville. And more tourist visitors mean a better economy for the country.

Samdech Techo Hun Sen once said that, after completing this project, Sihanoukville would become an attractive city of Cambodia, and it becomes a second economic pole of the country. Here’s what Samdech Techo Hun Sen said, “By 2020, Sihanoukville city will dramatically change its face both in roads and buildings…Sihanoukville city will become a potential attractive tourism hub, with commercial centers, and a gateway of Cambodia’s economic growth.”

With the new roads and infrastructural development, the province is upgraded now, and it now has better roads, new electric system, new flood system, and much more. As the country allows foreigners to own property in Cambodia (under some regulations), more number of foreign investors would be interested in real estate Sihanoukville.

COVID-19 And Direct Planes To Cambodia 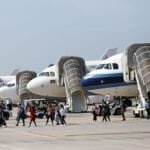 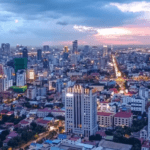 Why Invest in Cambodia Real Estate?